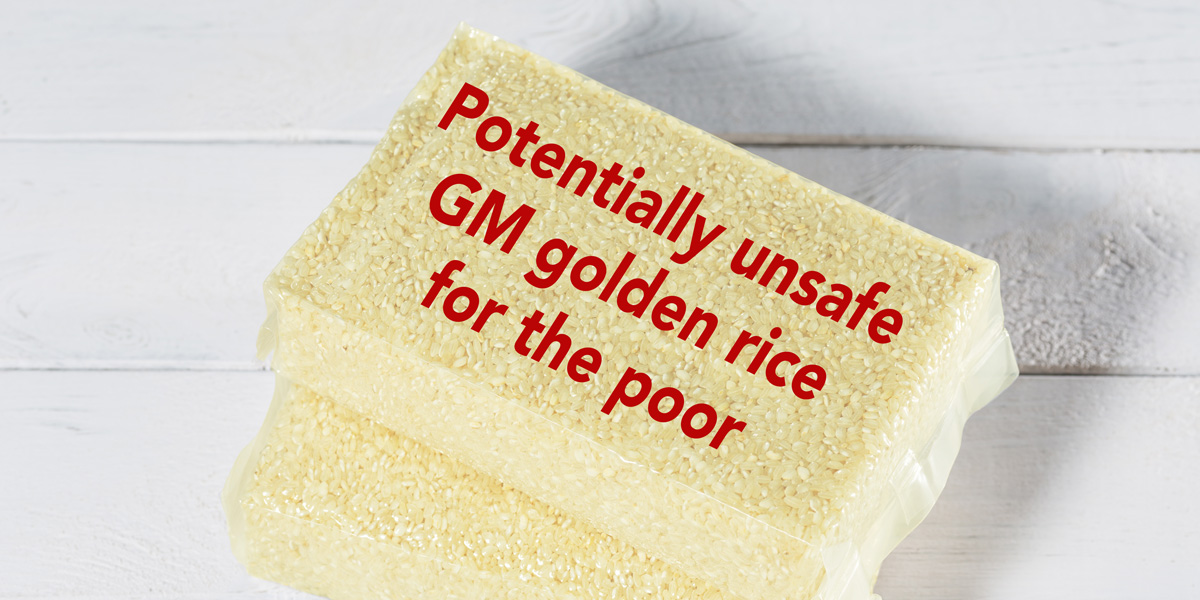 Rice has not been safety tested in animals or humans

According to an announcement by the International Rice Research Institute (IRRI), the Philippines Department of Agriculture-Bureau of Plant Industry has stated that it has found GMO golden rice to be "as safe as conventional rice".

GMO golden rice is engineered to contain the vitamin A precursor beta-carotene and is claimed to target the problem of vitamin A deficiency in developing countries, including the Philippines.

The Stop Golden Rice Network described the move in a press release as "a blow to the millions of rice farmers and consumers not just in the Philippines but also among other countries in Asia where rice is the major staple food".

Not tested for safety

In spite of these opinions, no animal feeding studies have been released to the public that could attest to the food safety of this GM rice. Human trials have focused on efficacy (ability of the subjects to absorb the beta-carotene in the rice) and not safety. So claims of food safety are assumptions that are not evidence-based.

A paper published in 2008 by Prof David Schubert of The Salk Institute for Biological Studies, La Jolla, California, noted that there was "no discussion about safety" in a scientific paper promoting GM golden rice, "despite the fact that simple derivatives of beta-carotene are known teratogens [i.e. cause birth defects]". Over a decade later, proponents of GM golden rice have still failed to engage in such a discussion.

It's possible that this particular danger may be averted by the failure of genetic engineers to jack up the beta-carotene in the rice to levels that could actually provide a health benefit – or cause adverse effects. The US FDA stated that GM golden rice does not meet the nutritional requirements to make a health claim. It said, “The concentration of beta-carotene in GR2E rice is too low to warrant a nutrient content claim.“

However, the truth is that we can't be sure that this GM crop won't cause teratogenicity problems. This is because the mechanism through which beta-carotene derivatives can cause birth defects is genotoxicity – damage to DNA. And it is a general principle of genotoxic agents that even when the individual doses are very low, they can cause an accumulation of DNA damage over time.

It has been scientifically proven that the beta-carotene in GM golden rice degrades in storage, meaning that breakdown products will accumulate in the rice that will then be eaten. No one has produced any research showing these breakdown products to be safe.

Dr Chito Medina, member scientist of MASIPAG, a farmer-scientist group in the Philippines that opposes GM golden rice, said, “The risks of golden rice far outweigh its supposed benefits. We will be better off improving and diversifying the food crops in the farms and diets of our children to ensure that proper nutrition is achieved.”

Even if the GM golden rice destined for the Philippines were miraculously to be found to contain enough beta-carotene to make a difference, that in itself would not help the poor and hungry. That's because beta-carotene doesn't work on its own – the body needs fat to absorb it. Subjects in a human trial of GM golden rice (designed to evaluate efficacy, not safety) were given butter to eat with the rice. If the target consumers for GM golden rice are too poor to afford a balanced diet and can only afford rice, as we are told, they are certainly too poor to buy butter. So there's simply no point in launching GM golden rice.

The Stop Golden Rice Network said that undue focus on rice alone is a dangerous trap: "As a coalition of more than 30 organizations across Asia where most of the world's rice is produced and consumed, we experiences first-hand the damaging public health impacts caused by promoting a single-crop diet. The Green Revolution launched in the 1960s pushed new, potentially high-yielding forms of rice on Asian farmers as a way to increase food production. As a result, white rice has come to dominate the once-diverse Asian diets — with dramatic health consequences."

The Network explained, "Today, 60 per cent of all people suffering from diabetes are in Asia, 90 per cent of whom suffer type 2 diabetes, the preventable form of the disease. Scientists from Malaysia's Endocrine and Metabolic Society claim that the soaring obesity in the country is due not to Western junk food, but to white rice. Unhealthy diets will worsen as long as the corporations continue to exert their influence over agricultural research and production and profit from it."

The Network added, "The Philippines has managed to slash their Vitamin D deficiency (VAD) levels among vulnerable sectors with conventional nutrition programmes. The country experienced significant decrease more than half of VAD cases from 40.1% in 2003 to 15.2% in 2008, due to various interventions. IRRI also recognized this success but still harp on the slight increase of VAD over the next five years to justify the Golden Rice approval."

The Network called for the Philippines authoritative bodies – the Department of Agriculture-Bureau of Plant Industry, PhilRice and IRRI – to protect and uphold the safety of the people not just in the Philippines but also in other target countries and halt the commercial propagation Golden Rice. The Network said, "malnutrition cannot be isolated from poverty and inequality," adding that biofortification crops like golden rice do not address the root causes of poverty and malnutrition, but "risk blindly reinforcing it".