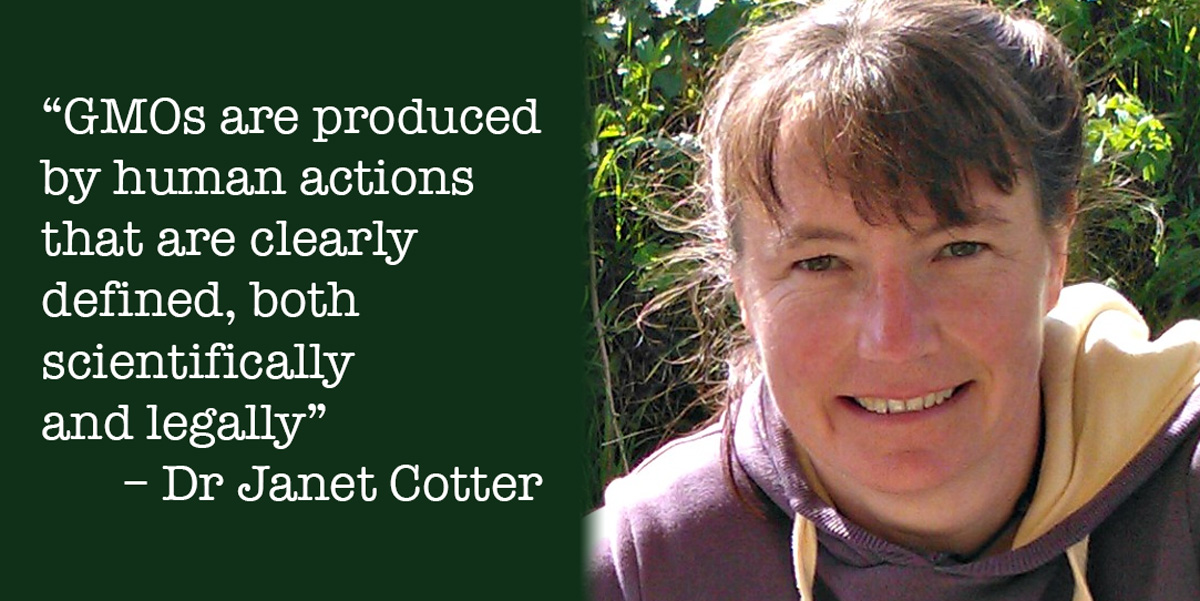 The food writer Nathanael Johnson recently published an article called “It’s virtually impossible to define ‘GMOs’”, while an article in Embo Reports argued that GMO is a “meaningless pseudo-category”. Dr Janet Cotter (pictured above) of Logos Environmental cuts through the confusion and explains what a GMO is – and isn’t

GMOs are clearly defined in Europe by the European Union, and internationally by the United Nations Cartagena Protocol on Biosafety. The problem is that in countries such as the USA and Australia, which are outside Europe and are not signatories to the Cartagena Protocol, there is no clear definition of a GMO.

Within Europe also, as genetic engineering technologies change, it’s useful to re-examine what is meant by a GMO and to ask how this definition applies to the new gene-editing technologies such as oligonucleotide directed mutagenesis (ODM) and CRISPR.

What defines a GMO? A GMO is defined by the EU as “an organism, with the exception of human beings, in which the genetic material has been altered in a way that does not occur naturally by mating and/or natural recombination”. The Cartagena Protocol defines a Living Modified Organism or LMO (Cartagena’s term for a GMO) as “any living organism that possesses a novel combination of genetic material obtained through the use of modern biotechnology”. Within these definitions is the concept that a GMO contains a novel arrangement of genetic material that either does not occur in nature, or has been obtained by a process that does not occur in nature.

Farmers and breeders have for sure been breeding and selecting varieties to obtain the best yields and durable resistance to diseases and pests, but this is by conventional breeding. Conventional breeding employs sex; genetic engineering does not employ sex! By that, I mean that the offspring is a result of male and female mating and there is a natural variation in the offspring, which allows those offspring with traits of interest to farmers to be selected for further breeding. In genetic engineering, the breeding process is not used to alter traits – the genetic material is directly altered by humans.

There are several ways in which this direct modification can take place. The most common method, in terms of commercial applications in agriculture, and applicable to both current GMOs and gene-editing techniques, is through the use of in vitro techniques.

In vitro literally means “in glass” and means in a test tube or, more generally, in a laboratory. It necessarily involves a human intervention, as it is humans who operate the laboratory. Current genetic engineering methods, and the new gene-editing techniques such as ODM and CRISPR, are clearly in vitro techniques – they involve the handling by humans of genetic material outside the organism, in a laboratory.

In both the EU definition of a GMO and the Cartagena Protocol, in vitro techniques are one of the central concepts used to define a GMO. Other techniques are also listed as producing GMOs, such as cell fusion between different groups of organisms (e.g. between two different species of animal), but these are not so common in commercial applications.

The direct modification of genetic material, outside the breeding process and often using in vitro techniques, produces GMOs. This is how GMOs are defined. GMOs are produced by human actions that are clearly defined, both scientifically and legally. Hence, although humans have been breeding plants for millennia, they have not been directly modifying genetic material until very recently.

All of the (rather few) GM crops grown commercially in the world contain genes from a different organism, usually a bacterium. But that fact does not define a GMO. A GMO can be created by transferring a gene between plants of the same species. This is known as “cisgenesis” and is differentiated from “transgenesis”. “Cis” means “the same side”, whilst “trans” suggests “across” or “on the other side”.

Concerns relating to GMOs can be split into two main categories. The first concerns the trait, the novel characteristic that the plant or animal has been genetically engineered for – for example, herbicide tolerance or insect resistance. We may be concerned that a herbicide tolerant trait increases herbicide use, or that insect resistance may be toxic to “friendly” insects, such as bees, as well as the target pest.

The second category of concerns is more fundamental. It concerns the genetic engineering process itself.

We have seen already in GM crops that the genetic engineering process can unintentionally introduce additional fragments of genes and rearrangements to the plant’s DNA. Altering an organism’s DNA can also upset the finely balanced and complex chemistry that enables an organism to function correctly. All this can have implications for food and environmental safety.

Many people think that GMOs cannot be said to be safe, no matter how much testing is done, because it is difficult, if not impossible, to look for the unexpected, and there is always a chance that an altered protein or chemical has not been noticed but could end up causing adverse effects on the environment or human health.

Concerns about unexpected and unpredictable effects arising from genetic engineering do not depend only on the presence of foreign genes, but also on the alteration of the organism’s genetic material, and that alteration might have unexpected consequences.

The new genetic engineering techniques, including gene-editing techniques such as CRISPR, are able to alter DNA at specific locations and do not necessarily involve the insertion of any genes, from the same or different species.

But that doesn’t mean they are safe. Gene editing techniques are subject to what are called “off-target effects”, that is, they may edit DNA at other places in addition to the intended location. Thus the potential for unexpected and unpredictable effects is still present with gene editing techniques and products produced by these genetic modification techniques still need to be regulated as GMOs.

The hornless cattle produced by CRISPR were mentioned on the BBC radio show, the Archers , without acknowledging the uncertainties related to the process or the fact that many hornless breeds of livestock have been developed through non-GM selective breeding.

4) Biotechnology is not genetic modification

Many of the advances in plant breeding over the past decade or so have utilised the modern biotechnology known as marker-assisted selection (MAS). MAS uses our knowledge of a plant’s or animal’s DNA but employs “markers” in that DNA to track a gene associated with a useful trait, such as drought-tolerance, through the conventional breeding process. The advantage is that this speeds up the breeding process, as the scientists know whether the desired genes are present in the plant before beginning field trials.

MAS is not genetic engineering. It results in conventionally bred plants. It does not directly modify genetic material and does not create GMOs. Yet it uses current knowledge of DNA and genomes to achieve plants and animals with desired traits. It has been applied to many crops and has produced many beneficial traits, including drought- and flood-tolerant rice.

Indeed, many scientists consider MAS to be superior to genetic engineering because it can be applied to complex traits – those controlled by more than one gene. This is difficult with genetic engineering as it usually uses a single gene approach. MAS, however, is not free from patents and there’s a disturbing trend to patent MAS varieties of plants developed by companies, based on the trait that has been introduced. Nevertheless, MAS clearly demonstrates that modern biotechnology is not all about genetic engineering, and that genetic engineering is not the only way, or even the best way, to utilise our knowledge of how genomes function.

Another biotechnology (although not necessarily modern) used in plant breeding is mutagenesis or mutation breeding. This is where a plant has been exposed to radiation or a chemical that causes its DNA to change. This is classed as a GMO in the EU, as the DNA has been altered, but was granted an exemption from the GMO regulations because of its long history of use, dating back to the 1920s or ‘30s. Several crop varieties planted today have been produced using mutational breeding.

Mutagenesis doesn’t introduce new genes to a plant – but a wheat variety produced in this way, called Renan, has been wrongly stated as containing transgenic material. Mutagenesis operates by applying an external stress to a plant, which causes a mutation in the DNA. These mutations are random, so it is not possible to predict the specific trait created by the mutation breeding until the offspring is tested. It’s very much a case of “see what you get”. This means its applications are limited, unlike genetic engineering.

As science progresses, there will undoubtedly be more new techniques and technologies that will have to be evaluated against these concepts, so it’s worth ensuring that we are clear at this early stage about what is a GMO and what isn’t.