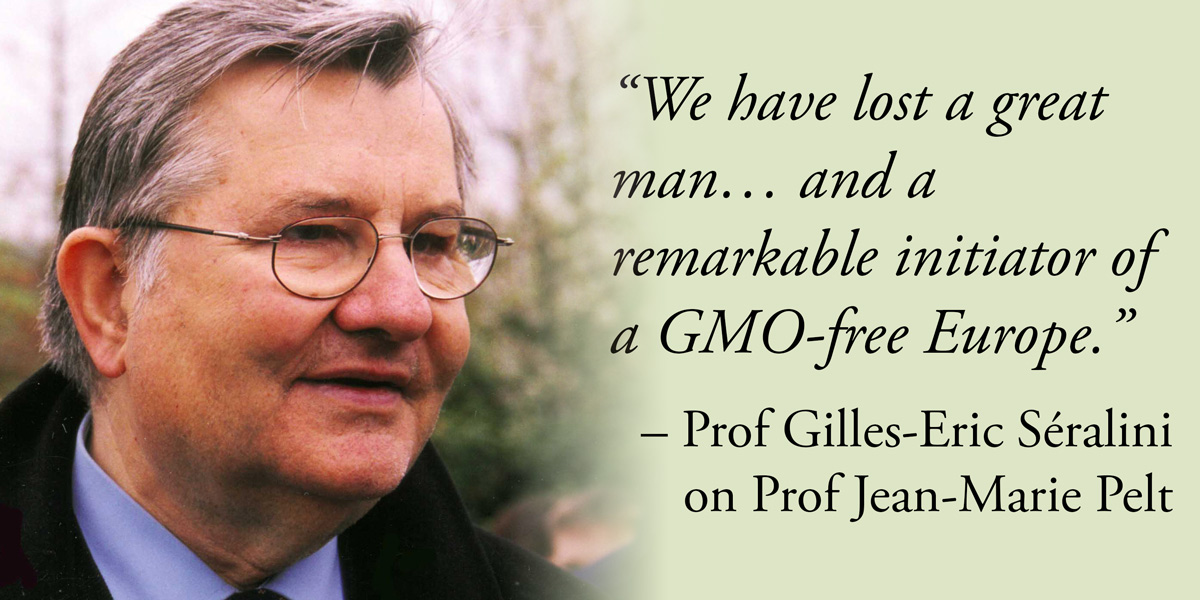 We have lost a great man, a wonderful friend, the most important environmental writer in the French language – with over 70 books to his name – and a remarkable initiator of a GMO-free Europe. Jean-Marie Pelt died on 23 December 2015 at the age of 82.

I got to know him in 1996, when he was providing advice to our Environment Minister Corinne Lepage, who also became a friend. He had initiated the moratorium on GMOs requested by many scientists and doctors, including Albert Jacquard and Jacques Testart. Together with Corinne Lepage, we co-founded CRIIGEN (www.criigen.org), the Committee for Independent Research and Information on Genetic Engineering. Jean-Marie was one of its presidents.

We attended many conferences together, the last one of which, following close on another, began in early October in Paris, with 3,000 people in attendance. He, the chef Jerome Douzelet, and I had addressed the public in succession; and we had again exchanged warm feelings. The public loved Jean-Marie so much; he could reconcile everything.

Full of humour, he often told me of his religious faith, and might have chosen to die at this time. He did not suffer. Colette Coussement accompanied him for more than 40 years at the head of the European Institute of Ecology. She reassured me that she would return to CRIIGEN.

Together, we wrote the book, After Us, the Deluge? On environmental risks to children and adults, he was indefatigable. I worked at his home; he had a marvellous simplicity. He gave everything to all the children he adopted and supported. He was a botanist and exceptional pharmacologist, and in his youth a great explorer of unknown worlds (Syria, Yemen, the deserts, and Africa). All his life he acted as our guide. He was very close to Robert Schuman, the founder of the European Union. In Metz, France, working alongside the mayor over a period of many years, he greatly contributed to the architecture and urban environment of the city.

Let us embrace him, and his memory, for all he has done for us. It was during the course of my studies that I wrote to him for the first time to express my admiration of his writings. He shone brightly in my life. Thank you, Jean-Marie.