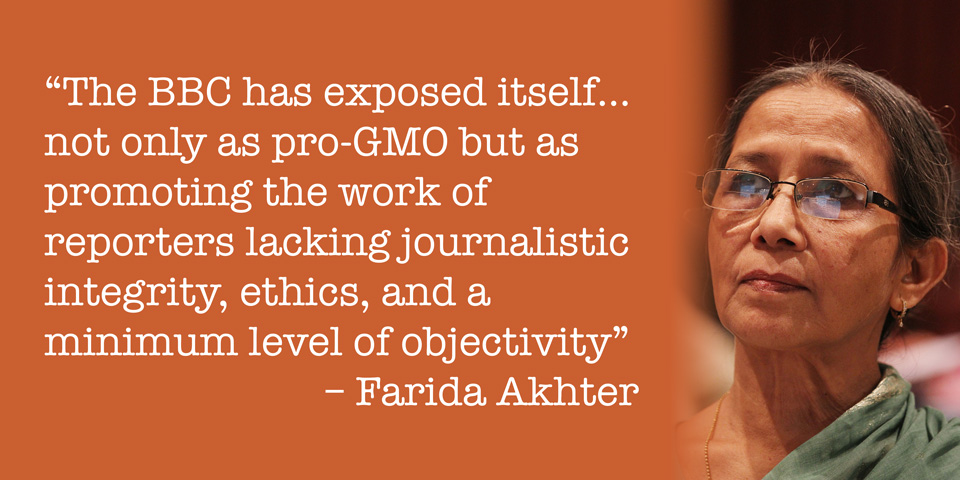 GMWatch has submitted a complaint to the BBC regarding the coverage of GM Bt brinjal in Bangladesh in the BBC Panorama programme, “GM Food: Cultivating Fear”. The programme claimed that Bt brinjal had been a 90% success in its second year of cultivation – a claim vigorously contested by United News of Bangladesh journalist Faisal Rahman. After questioning the BBC and the programme's producer, Joseph McAuley, about the source of the 90% success figure, we concluded that the claim was not based on sound evidence.

The BBC Editorial Complaints Unit rejected our complaint and maintained that the programme was accurate and not misleading. We are now escalating our complaint to the final level, the BBC Trust.

Meanwhile a second Bangladeshi source has contacted GMWatch to condemn the BBC Panorama programme as inaccurate and misleading. Farida Akhter is the executive director of the policy research organization UBINIG and has been closely following the GM Bt brinjal project in Bangladesh.

I knew international media like the BBC are mostly pro-GMO, but I didn’t know that some journalists at the BBC deliberately deceived viewers, were dishonest in their dealing with the people they interview, and bluntly lacked journalistic ethics. My first response to the Panorama team’s request to interview me as an anti-GMO activist was that they would not give us a balanced proportion of time in the programme so that the viewers could see both sides of the argument and form their own judgment. I told Joseph McAuley, the producer, of my position in a skype call before he and his team came to Bangladesh. I said I did not want to be used only to justify the notion that we were given a chance to say what we wanted to say. He assured me that he would give a balanced view.

But the programme turned out to be a ‘Mark Lynas GMO promotion show’: little more than a desperate attempt to prove that GMOs are absolutely necessary and that those who are opposing them are cultivating fear! If that was the agenda, then why did they interview me? It was an act of deception, and the whole show was full of misinformation that the BBC promoted to support GMOs. I found the programme to be a dishonest and one-sided view of what was happening with Bt brinjal in Bangladesh.

I demand an answer as to why they interviewed me for over 5 hours in a village and used our farmers to show their healthy and thriving non-GMO brinjal crops, yet were unduly “impressed” with a completely misleading account of one “showcase” Bt brinjal farmer, Mr Hafizur Rahman, whom both the BBC and Mark Lynas visited. Why could the BBC not find any other farmer to prove their 90% success claim? One farmer’s experience does not represent 90% success. I know the BBC team interviewed farmers in other areas, such as Kushtia in North-West Bangladesh. I also know from our own investigation that many of those farmers found that Bt brinjal performed badly. Where is that footage? If they had to prove that Bt brinjal was a 90% success, why could they not show at least one example of the 10% performance problem?

Within the past few days I checked with the Kushtia Block Supervisor of the Agricultural Extension Department. He said he was instructed to intensively monitor the performance of Bt brinjal. And the farmer who was being monitored reported that he had to use pesticides twice a day to ensure “good performance”. Is this included in the BBC’s 90% success story?

The BBC was playing naive by asking the Agriculture Minister Matia Chowdhury whether Bangladesh was truly free and independent of big agri-tech companies such as Monsanto. Ms Chowdhury answered that the GM gene was given by Cornell University. It seems neither the BBC nor Ms Chowdhury had any idea about the connection between Monsanto and Cornell University. Or were they intentionally fooling the viewers, who may not have known about the corporate connection and may have thought that Cornell University was purely interested in science? If the BBC were honest, it would have made the link clear.

They asked me this question too. So why they did not show that portion of the interview in the programme, in addition to Matia’s and Mark Lynas’s responses? I found the omission offensive, because it was one of the more crucial questions I answered.

I also told them about the tripartite agreement with intellectual property rights for nine indigenous brinjal varieties that have been genetically engineered with the Bt gene, which the BBC did not mention.

The tripartite agreement was signed by Mahyco, Sathguru Management Consultants Private Ltd (India) and Bangladesh Agriculture Research Institute on March 14, 2005 for the development and release of cultivable Bt brinjal varieties in Bangladesh. It states that Monsanto-Mahyco preserves all the intellectual property rights to the technology. Mahyco is a subsidiary of Monsanto and Sathguru Management Consultants Private Ltd. is the regional coordinator of the South Asian region for the Agricultural Biotechnology Support Project II of USAID, which counts Monsanto as a partner.

Why did the BBC reporter Tom Heap feel he had to show that he ate a curry made with Bt brinjal at Mr Rahman’s house? Was it an attempt to incorrectly prove that ‘nothing happens’ after eating Bt brinjal? If so, it was irresponsible. No one has said that there would be immediate health hazards from eating Bt brinjal. Does Tom Heap take responsibility for those who will eat it regularly for long-term periods and may face potential hazards?

The BBC has exposed itself in a negative light through this programme, not only as pro-GMO but as promoting the work of reporters lacking journalistic integrity, ethics, and a minimum level of objectivity. Ethics and objectivity are not too much to ask from the BBC, despite its pro-GMO stance. If the BBC wanted to promote GMOs, it should have excluded me from the programme. I would have been happier with that option.

On 18 July 2013, before the approval of Bt brinjal for field cultivation, UBINIG and Nayakrishi Andolon (a farmers’ movement) organised a protest in front of BARI head office in Gazipur. Farmers from Tangail and Pabna joined, along with UBINIG activists. Women in the picture are also farmers. 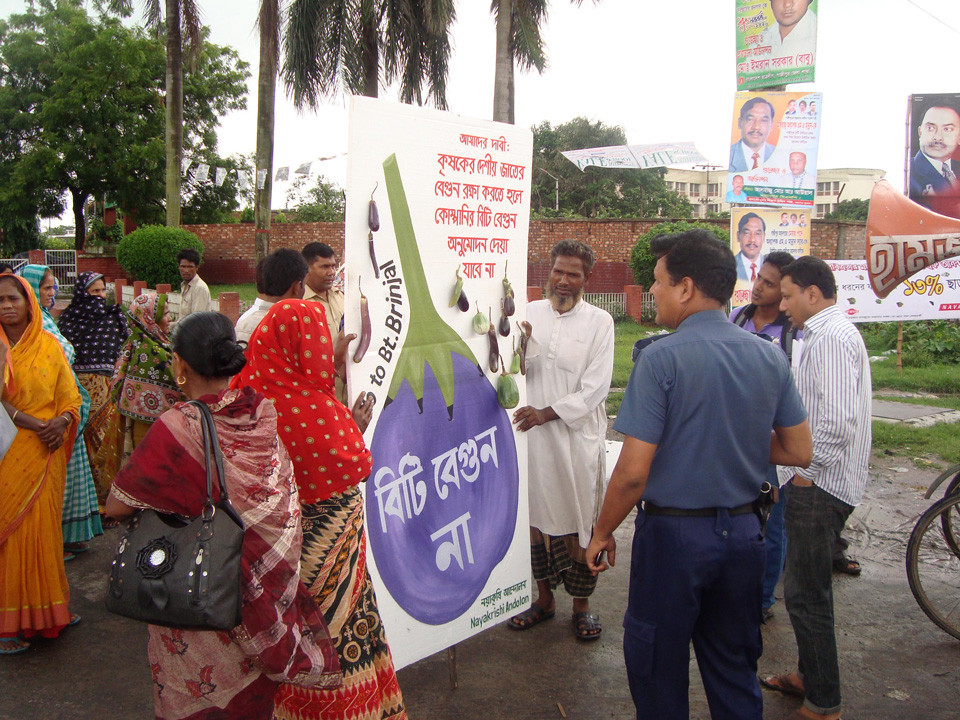 Protestors stood peacefully in front of the BARI offices and tried to go inside to meet the director general, who did not respond. Instead he called the police to disperse the crowd. However, the policeman did not find the protest offensive, because it aimed to save local varieties of brinjal. He only requested the protestors to move to a different place. 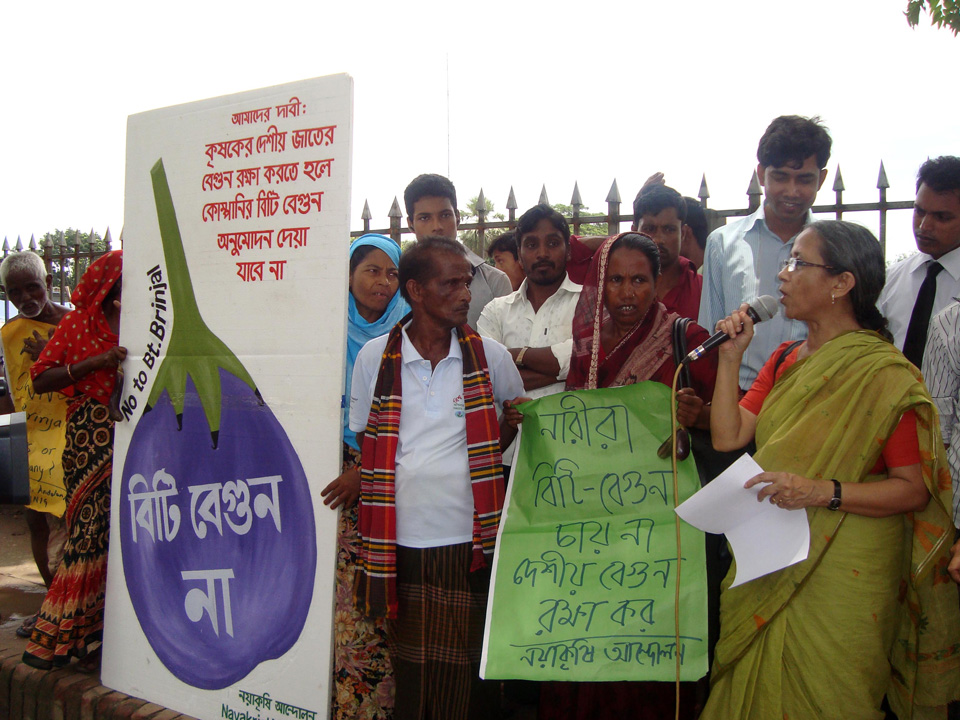 Farida Akhter addressing the rally at an area near the BARI offices. She explained what Bt brinjal is and why the protestors are concerned. The handwritten placard held by a woman farmer says, “Women do not want Bt brinjal. They want to save local brinjals.” 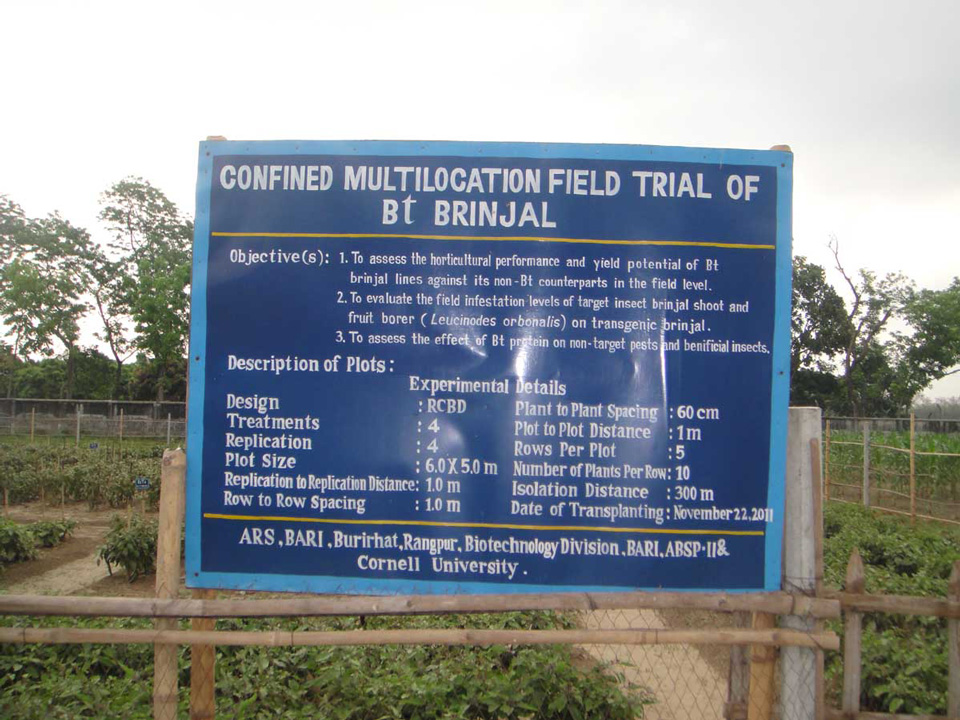 The UBINIG team visited all the Bt brinjal field trial sites and took pictures as well as recording information. The team reported that they found no evidence of positive results of the trials. The sites had signboards showing the names BARI, ABSPII (The Agricultural Biotechnology Support Project II) and Cornell University.