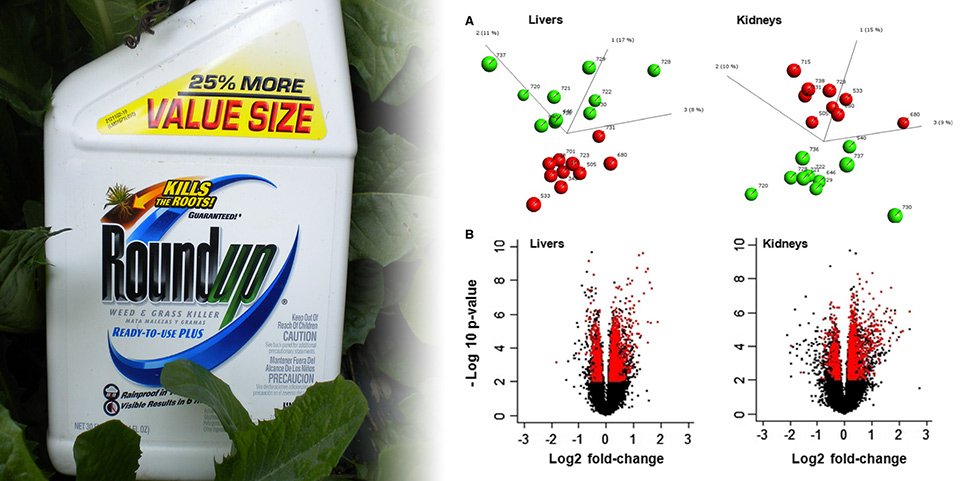 Roundup at extremely low doses within the levels permitted in drinking water in the EU can damage the liver and kidneys of rats, according to a new peer-reviewed study led by Dr Michael Antoniou at King's College London. Alterations in gene function were found that reflected diseases such as fibrosis (scarring), necrosis (areas of dead tissue), phospholipidosis (disturbed fat metabolism), and damage to mitochondria (the centres of respiration in cells).

In the new study, the researchers analysed the gene expression profiles of liver and kidney tissues from the Roundup-treated rats in the long-term rat feeding study led by Prof Gilles-Eric Seralini at the University of Caen, France. The gene expression changes seen in the new analysis confirmed the liver and kidney pathologies suggested by the anatomical and biochemical (blood and urine) findings in the Seralini study.

The authors of the new analysis concluded that long-term exposure to Roundup in an established laboratory animal toxicity model at an ultra-low, environmentally relevant dose “can result in liver and kidney damage with potential significant health implications for animal and human populations”.

Lead author Dr Michael Antoniou said: “The findings of our study are very worrying as they confirm that a very low level of consumption of Roundup weedkiller over the long term can result in liver and kidney damage. Our results also suggest that regulators should re-consider the safety evaluation of glyphosate-based herbicides.”
—

Background:
Glyphosate-based herbicides (GBH) are the major pesticides used worldwide. Converging evidence suggests that GBH, such as Roundup, pose a particular health risk to liver and kidneys although low environmentally relevant doses have not been examined. To address this issue, a 2-year study in rats administering 0.1 ppb Roundup (50 ng/L glyphosate equivalent) via drinking water (giving a daily intake of 4 ng/kg bw/day of glyphosate) was conducted. A marked increased incidence of anatomorphological and blood/urine biochemical changes was indicative of liver and kidney structure and functional pathology. In order to confirm these findings we have conducted a transcriptome microarray analysis of the liver and kidneys from these same animals.

Results:
The expression of 4224 and 4447 transcript clusters (a group of probes corresponding to a known or putative gene) were found to be altered respectively in liver and kidney (p<0.01, q< 0.08). Changes in gene expression varied from −3.5 to 3.7 fold in liver and from −4.3 to 5.3 in kidneys. Among the 1319 transcript clusters whose expression was altered in both tissues, ontological enrichment in 3 functional categories among 868 genes were found. First, genes involved in mRNA splicing and small nucleolar RNA were mostly upregulated, suggesting disruption of normal spliceosome activity. Electron microscopic analysis of hepatocytes confirmed nucleolar structural disruption. Second, genes controlling chromatin structure (especially histone-lysine N-methyltransferases) were mostly upregulated. Third, genes related to respiratory chain complex I and the tricarboxylic acid cycle were mostly downregulated. Pathway analysis suggests a modulation of the mTOR and phosphatidylinositol signalling pathways. Gene disturbances associated with the chronic administration of ultra-low dose Roundup reflect a liver and kidney lipotoxic condition and increased cellular growth that may be linked with regeneration in response to toxic effects causing damage to tissues. Observed alterations in gene expression were consistent with fibrosis, necrosis, phospholipidosis, mitochondrial membrane dysfunction and ischemia, which correlate with and thus confirm observations of pathology made at an anatomical, histological and biochemical level.

Conclusion:
Our results suggest that chronic exposure to a GBH in an established laboratory animal toxicity model system at an ultra-low, environmental dose can result in liver and kidney damage with potential significant health implications for animal and human populations.