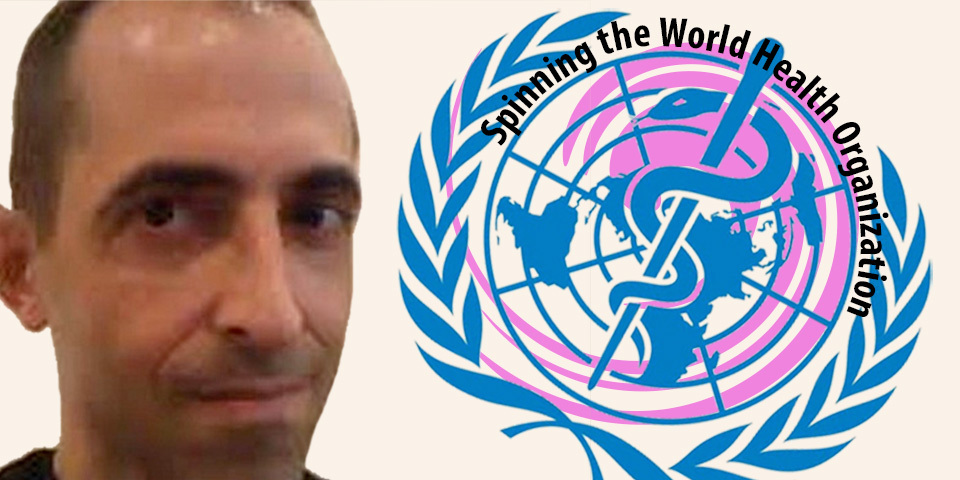 Journalist William Saletan’s appeals to scientific authority do not stand up, says Claire Robinson in the second of a three-part series

In Part 1 of this series, we noted how the political reality of the push for GMOs is entirely missing from journalist William Saletan’s carefully crafted invective against those who criticize GMOs. But it would be wrong to conclude from this that Saletan is apolitical. In fact, as we also saw, he’s a drone warfare-loving Republican with a history of bad judgement calls on touchstone issues like the Iraq war and race and IQ.

And the timing of his Slate magazine piece could not have been more political. The article, which dismisses GMO labelling as worthless, was published just before the Republican-led House of Representatives considered a complete ban on mandatory GMO labelling.

So when Saletan fulminates against “a leftist war on science”, it's wise to ask whose “science” exactly is it that Saletan is so keen to defend? And what does that “science” really tell us?

Appeal to authority collapses under scrutiny

In his article, Saletan claims to have researched GMOs for up to a year. All the more remarkable, then, that on the vexed issue of GMO safety, he falls for the discredited GMO lobby trick of a vague appeal to authority that doesn’t stand up to scrutiny. Saletan states that eminent scientific bodies like the World Health Organization (WHO) “have all declared that there’s no good evidence GMOs are unsafe”. The implied question is: who are you to doubt them?

The trouble is that 124 health- or science-related organizations from around the world have declared doubts about the safety of GM foods and/or called for mandatory labelling – something that Saletan vehemently opposes.

Saletan doesn’t even appear to have read the WHO statement on GMO safety that he relies on. Certainly the WHO did say, “No effects on human health have been shown as a result of the consumption of GM foods by the general population in the countries where they have been approved” – though skeptics will note that it is hard to find effects on human health in the absence of any studies.

But in the preceding text, the WHO offers a crucial qualification. It says, “Different GM organisms include different genes inserted in different ways. This means that individual GM foods and their safety should be assessed on a case-by-case basis and that it is not possible to make general statements on the safety of all GM foods” (my emphasis).

Scientists and campaigners on both sides of the GMO debate would agree with this principle. It underlies all regulatory safety assessments of GMOs across the world. Saletan, in contrast, hasn’t caught up with the idea, instead relying on scientifically unsupportable generalizations about GMO safety and personal attacks on GMO critics.

Given Saletan’s faith in the WHO, it is astonishing that he fails to mention the recent bombshell dropped by the WHO’s cancer agency IARC when it declared that glyphosate, the herbicide that over 80% of GM crops are grown with, is a “probable” carcinogen. Rather than directly referring to the IARC verdict, he links to an article about it, without saying that’s what it’s about. He frames the article in terms of a “debate about the effects of glyphosate” before quickly adding, “experts agree that it’s relatively benign”.

Who are these “experts” that Saletan believes know better than the scientists tasked by the IARC with reviewing glyphosate (chosen on the basis of their expertise and their independence from vested interests)? The answer: not toxicologists, or experts in public health, or indeed anyone with relevant expertise, but… a group of economists working for the US Dept of Agriculture! 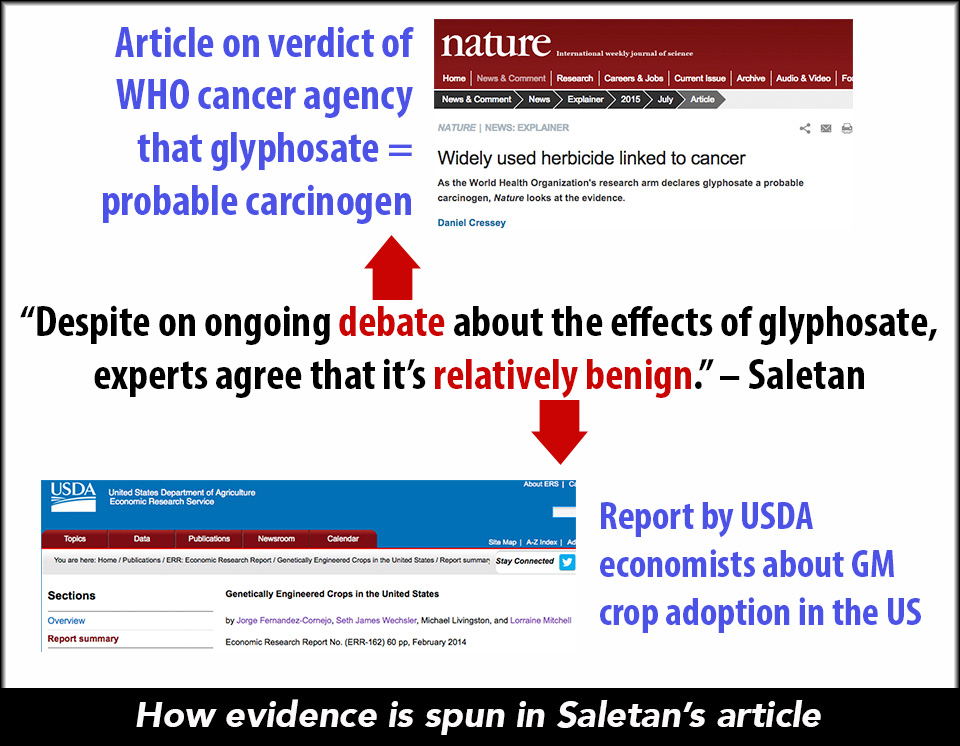 And in the report that Saletan links to, the economists do not give an opinion on the toxicity of glyphosate – rightly, because they are not qualified to do so. Their only reference to glyphosate’s toxicity is to say that there are even “more toxic and persistent herbicides”. Note to Saletan: this does not translate as “experts” agreeing that glyphosate is “relatively benign”.

The moral of this sorry tale is that Saletan is happy to play the WHO card – misleadingly – on GMOs, but withholds it on the herbicide that the vast majority of GMOs are grown with. That speaks volumes.

Saletan claims that “hundreds of studies” show GMO foods are no more risky than non-GM foods. He cites as evidence the GMO lobby’s favorite Big Lists of Studies, such as the Nicolia review, which supposedly presents 1700 studies showing a lack of risk from GMOs.

However, he ignores an even bigger list of over 1800 studies showing risks and proven harms from GMO crops and the pesticides associated with them.

As an example of “skeptics” who refuse to be convinced whatever the evidence in favour of GMOs, Saletan dismissively links to Earth Open Source’s report GMO Myths and Truths. This report systematically demolishes the Nicolia review by showing that it suffers from important omissions, fails to show GMOs are safe, and provides evidence of risk for some GMOs. GMO Myths and Truths makes clear that the Nicolia review relies for its authority on the assumption – accurate in Saletan’s case – that people won’t bother to read the studies it claims show safety and won’t be aware of the studies it omitted. But Saletan doesn’t address the arguments made by the GMO Myths authors. Like the three wise monkeys, when it comes to GMOs, he prefers to “see no evil”.

Saletan also relies on the Van Eenennaam review, another Big List of Studies, which was co-authored by a former Monsanto scientist. The pro-GMO lobbyist Jon Entine called this review the “trillion meal study” showing that GM animal feed is safe. The central message of the review is that billions of farm animals have been eating GMOs for 28 years and have not got any sicker in that time.

In reality, however, over 90% of Van Eenennaam’s data are on 49-day-old broiler chickens. The authors fail to control for multiple factors, including the fundamental one of establishing which animals are eating which GMOs, in what proportion of their diet, and for how long. These data give no information on long-term health effects of GM feed in poultry and no useful information on any types of health effects in mammals such as cattle and pigs. They tell us nothing about possible effects on human health. Scientifically speaking, the superficially impressive figure of 100 billion animals eating GM foods over 28 years doesn’t amount to a hill of beans. The plural of useless data is not good data.

Importance of following evidence to its source

Given such radical disagreements over interpretations of the scientific literature, you’d think Saletan would at least have read one or two studies showing risks or actual harm from GMOs to try to establish who’s being honest and who’s telling porkies.

After all, you don’t have to be a specialist to understand simple statements of fact in a study or to consult an independent scientist about its findings. GMO Myths and Truths provides an easy guide to key studies and findings – Saletan is of course free to agree or disagree with the authors’ interpretations once he has looked at the studies.

Isn’t that what journalists are supposed to do: follow the evidence to its primary source and make a judgement?

But as we’ve already seen, Saletan previously came seriously unstuck when writing for Slate, after claiming to have looked at “all the data, studies, and arguments” on a highly contentious issue before being forced to admit he’d been "negligent in failing to research and report this" properly.

In his GMO article, Saletan’s failure to check out the evidence and question GMO lobby myths once again lets him down badly. The third and final article in this series will look at the specific example of Saletan’s claims of a GMO papaya “triumph”.