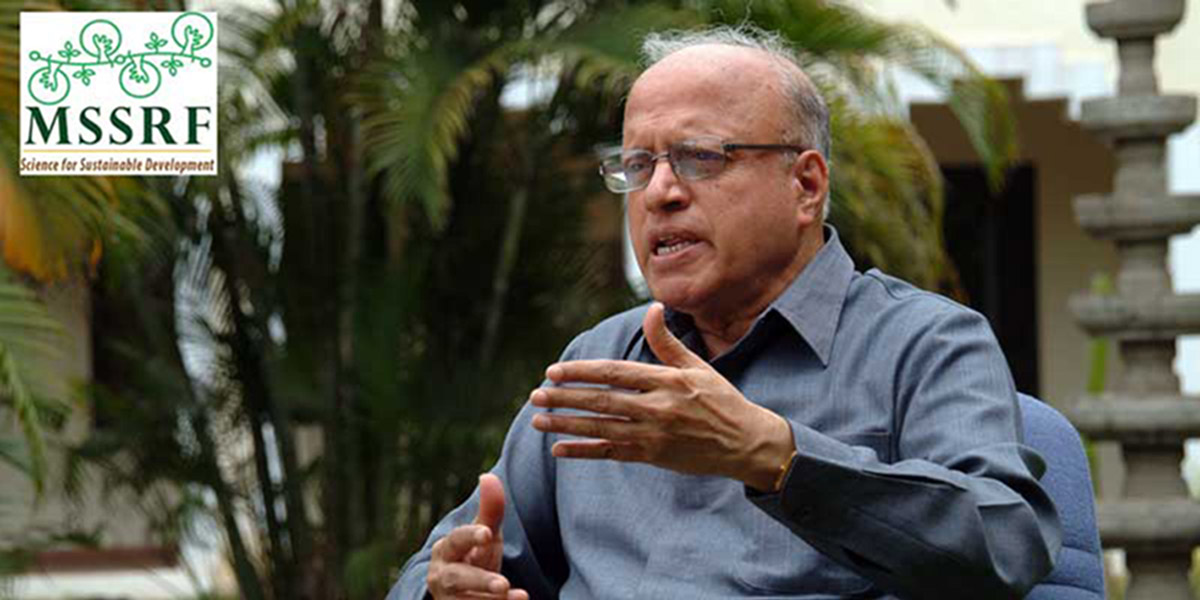 Calls for ban on herbicide-tolerant and Bt insecticidal crops

The plant geneticist and World Food Prize winner M.S. Swaminathan is known as the "father of the Green Revolution in India", since he helped introduce into the country a new US-influenced agricultural movement focusing on modern high-yield varieties of wheat and rice – and their accompanying pesticides and fertilizers.

Since 1988 he has headed his own M.S. Swaminathan Research Foundation (MSSRF) in Chennai, India. In the early 2000s the Foundation saw GM crops, and biotechnology in general, not only as having immense potential but as "the only way we can face the challenges of the future". Given Dr Swaminathan's role in the first Green Revolution in India, his promotion of GM crops was inevitably promoted as an ushering-in of a second Green Revolution.

And in 2009 Dr Swaminathan published an article in which he said that no scientific evidence had emerged from the ten years of commercialisation of GM crops to show any of the concerns about them were justified. He also said that all GM crops were subjected to stringent regulatory scrutiny and that India would soon "have in place a very effective, independent, credible, regulatory authority to ensure the safe release of GM products”.

But Swaminathan's promotion of GM crops has also been increasingly marked at times by important caveats, reflecting a concern for sustainability, biosafety, and the impact of agricultural innovations on the rural poor. And those concerns would seem to underpin a remarkable newly published peer-reviewed paper[1] that he co-authored with his colleague P.C. Kesavan, in which he condemns GM crops as unsustainable and says they should be banned in India. He is also severely critical of the performance of India's regulators.

The uncompromising nature of his new publication marks his clearest departure yet from his previous broad endorsement of GM crops, and looks set to place him in the substantial line of scientific former-GMO-supporters-turned-critics, such as Dr Caius Rommens, Dr Belinda Martineau, and Dr Arpad Pusztai.

"No doubt" that GM Bt cotton has failed

"There is no doubt that GE Bt-cotton has failed in India: it has failed as a sustainable agriculture technology and has therefore also failed to provide livelihood security of cotton farmers who are mainly resource-poor, small and marginal farmers.

"That a plea has recently been made to Bt-cotton farmers to adopt the time-honoured traditional integrated pest management (IPM) system to sustain Bollgard II cotton points to the relative effectiveness of a traditional vis-à-vis modern technology. It is unethical to ask farmers to first adopt the highly expensive technology of Bt-cotton and when it subsequently failed, to then introduce an inexpensive traditional technology to protect Bollgard II cotton. Both Bt- and herbicide-tolerant (HT) crops are now proven to be unsustainable agricultural technologies. They have not decreased the need for toxic chemical pesticides, which was the reason for them in the first place."

In their paper, Drs Swaminathan and Kesavan recall that the Technical Expert Committee (TEC) appointed by the Supreme Court of India in a case brought by environmental campaigner Aruna Rodrigues recommended a total ban on GM herbicide-tolerant crops. Dr Swaminathan  and Dr Kesavan, who was one of the experts appointed to the TEC, also draw attention to the "rising health concerns associated with Bt-crops", as well as evidence pointing to the conclusion that "Bt toxins are toxic to all the organisms, including mammals". Due to these factors, they demand that the recommended indefinite moratorium of the TEC in its final report on Bt crops must "translate into a ban" on Bt crops as well.

Although Drs Swaminathan and Kesavan exempt Bt cotton from this demand for a ban, they state that the Indian government was right to place a moratorium on Bt brinjal (eggplant). They note that when the biosafety dossiers on Bt brinjal were forced into the public domain by the Supreme Court, the court-appointed TEC "found several deficiencies in design, collection of data and their interpretations, and also noted that the important studies were not done".

The authors note some examples from history of unintended health effects from genetic engineering. These include Calgene's Flavr Savr tomato, which was found to cause stomach lesions in experimental rats, and the L-tryptophan scandal, in which a food supplement manufactured using GM bacteria killed 37 Americans and sickened 1500 more.

They ask the rhetorical question of how GMOs can be claimed to be safe to eat when they are not even labelled in the US and thus any resulting harm cannot be traced back to the consumption of any GM food.

Drs Swaminathan and Kesavan cite scientific evidence that the glyphosate-based herbicides, used on most GM crops, and their active ingredient glyphosate have been found to be genotoxic, teratogenic (causing birth defects), and carcinogenic. They also mention the recent court case in the US in which a jury awarded groundskeeper Dewayne Johnson USD 289 million in damages (subsequently reduced to USD 78 million by the judge) against Monsanto after finding that the company's glyphosate-based herbicide Roundup could have caused his cancer and that the company had covered up the risks.

They state that the GM mustard tolerant to glufosinate herbicide that has been submitted to Indian regulators for commercialisation "must be banned", since "genotoxic glufosinate is at least as hazardous as glyphosate".

They also reference a study showing that the yield of GM crops in general has been shown to be no better than that of non-GM crops, adding that India has several varieties of mustard that outyield the GM variety.

Drs Swaminathan and Kesavan have nothing but criticism for India's GMO regulators, the Genetic Engineering Approval Committee (GEAC) and the Review Committee on Genetic Manipulation (RCGM). They write, "The functioning of the GEAC and RCGM has rightly come under severe criticism due to endemic conflicts of interest, lack of expertise in GMO risk assessment protocols, including food safety assessment, the assessment of their environmental impacts, the lack of ‘need’ for expensive transgenic technology, and which must include a socio-economic assessment of their farming impacts on resource-poor small and marginal farmers, etc. which is also absent."

They add that these bodies have been heavily criticised by three official government reports. They demand "independent, rigorous oversight of GE crops, without the least hint of any conflict of interest". What is lacking in India, they say, are "persons of proven competence in genetic toxicology and safety analyses" and "able economists who are familiar with and will prioritize rural livelihoods, and the interests of resource-poor small and marginal farmers rather than serve corporate interests and their profits".

They conclude, "We strongly believe that scientific integrity and social responsibility are not negotiable. No technology may be exempt from these values."

It seems likely that despite M.S. Swaminathan's international renown and P.C. Kesavan's highly distinguished record, they will now be subjected to the kind of vicious attacks that have rained down on other scientists who have flagged up serious concerns over GM crops and foods.