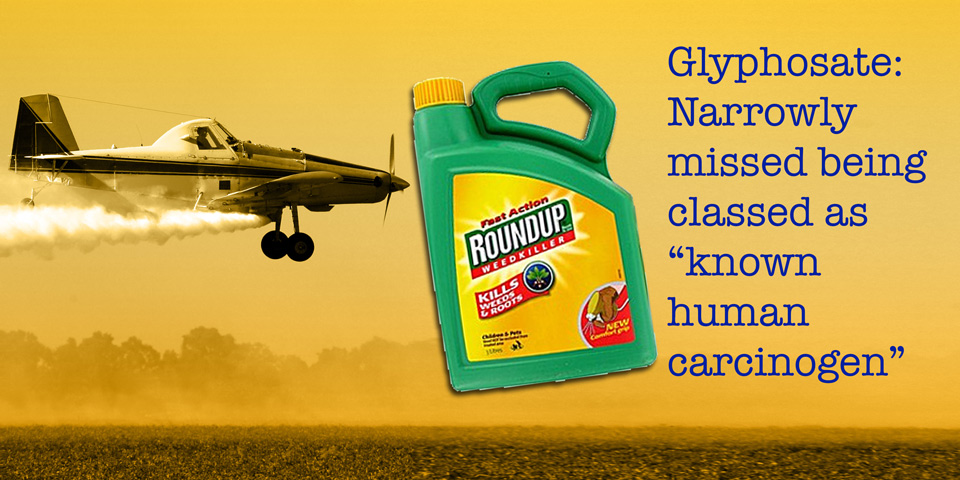 Glyphosate narrowly missed being classed as a known rather than a probable carcinogen in the World Health Organisation evaluation. Claire Robinson reports

An excellent article by Andrew Cockburn in Harpers explains that anti-invasive species hysteria is prevalent across the US, from university biology departments to wildlife bureaucracies to garden clubs. Glyphosate is the weapon of choice for battling invaders that are seen as threatening native species. Over 90 percent of California’s land managers use the compound, which is particularly recommended as a slayer of eucalyptus trees. Last year, the federal government spent more than $2 billion to fight the alien invasion, up to half of which was budgeted for glyphosate and other poisons.

This resulting high exposure to glyphosate of the American public is an especially serious issue since the decision of the World Health Organisation’s cancer agency IARC that the herbicide is a “probable” carcinogen. Monsanto has tried to bamboozle the public about the significance of the IARC decision by confusing the 2A (probable human carcinogen) category that IARC put glyphosate into with the 2B category – “possible human carcinogen”, a group occupied by common substances like coffee and pickled vegetables. The message is: many of us drink coffee and eat pickled vegetables without worrying, so we shouldn’t worry about glyphosate either.

The IARC group was headed by Aaron Blair, an epidemiologist who spent thirty years at the National Cancer Institute. Cockburn paraphrases Blair as follows:

“According to Blair, there were good grounds to declare that glyphosate definitely causes cancer” – in other words, it should be classed in category 1 as a known human carcinogen. But “This did not happen, [Blair] said, because ‘the epidemiologic data was a little noisy’. In other words, while several studies suggested a link, another study, of farmers in Iowa and North Carolina, did not. Blair pointed out that there had been a similar inconsistency in human studies of benzene, now universally acknowledged as a carcinogen. In any case, this solitary glitch in the data caused the group to list glyphosate as a probable (instead of a definite) cause of cancer.”

The bottom line is that Blair has placed the row in historical perspective by comparing glyphosate with benzene, tobacco, asbestos and arsenic. And we all know how dangerous they are.

Blair of the IARC mentions the Agricultural Health Study in Iowa and North Carolina as a study which, in Cockburn’s paraphrasis, did not find a link between glyphosate and cancer. In reality, though, the study is not reassuring and doesn’t contradict other studies that did find a link, for two reasons.

1. The study did find “a suggested association” between glyphosate exposure and multiple myeloma, a type of blood cancer. A rebuttal study commissioned by Monsanto and published in 2015 ahead of the re-evaluations of glyphosate by the US and the EU used a different dataset and concluded “no convincing evidence” of a link. Whether the Monsanto re-analysis is more reliable than the findings of the publicly funded Agricultural Health Study is debatable.

2. In a separate study also conducted in Iowa, detectable levels of glyphosate were found in urine samples from farm families and non-farm families. The researchers put this down to the fact that glyphosate herbicides are used in home gardens as well as in agriculture. Thus in the Agricultural Health Study the control population is as likely to be exposed to glyphosate as the “exposed” population, so the differences between the groups may be small or non-existent. The implication of the urine study is that the real link between glyphosate and cancer could be far stronger than was found in the Agricultural Health Study.

The massive irony emphasised by Cockburn’s article is that America’s reliance on the probable carcinogen glyphosate has backfired. Glyphosate over-use on both invasive species and GM glyphosate-tolerant crops has led to the spread of glyphosate-resistant weeds. The agricultural consultant Dr Charles Benbrook is quoted in the article as saying, “It’s a disaster… As resistant weeds spread and become more of an economic issue for more farmers, the only way they know how to react — the only way that they feel they can react — is by spraying more.”

It has become common for farmers to spray three times a season instead of once, and Benbrook estimates that the extra doses of herbicide will add up to 75,000 tons in 2015. Farmers now have to contend with glyphosate-tolerant marestail that grows up to eight feet tall, with stems thick enough, according to one farmer, to “stop a combine in its tracks”. It is, according to Cockburn, the ultimate “alien invasive, made right here in America”.