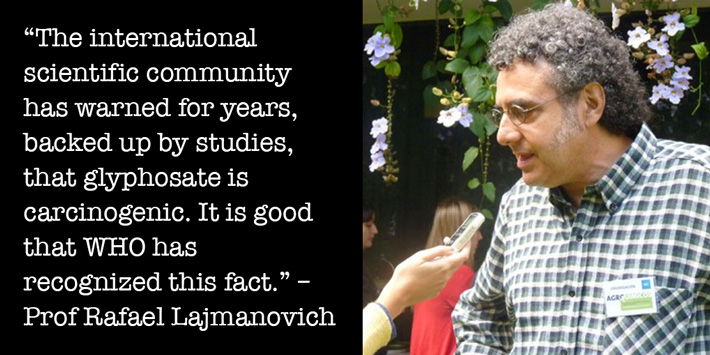 While the rest of the world takes on board the WHO’s verdict and moves forward, the UK Science Media Centre is in denial. Claire Robinson reports

In the wake of the re-classification of glyphosate herbicide as a probable carcinogen by the IARC, the cancer agency of the World Health Organisation (WHO), support has poured in from independent scientists and agencies worldwide. The quotes listed below this article were collected from independent scientists in Argentina by the journalist Dario Aranda (English translation by GMWatch) in an article for the newspaper Pagina12.

For example, one quote is from Rafael Lajmanovich, professor of the Department of Ecotoxicology, National University of Litoral, and a researcher at CONICET, the main national research council of Argentina. Lajmanovich said, "The international scientific community has warned for years, backed up by studies, that glyphosate is carcinogenic. It is good that WHO has recognized this fact.”

The scientists who offered quotes had one main complaint: that it had taken the WHO so long to realise what they had long known about glyphosate herbicides.

In Brazil, meanwhile, the National Cancer Institute José Alencar Gomes da Silva (INCA), part of the country’s Ministry of Health, published a hard-hitting report which approvingly cited the WHO’s verdict and condemned GM herbicide-tolerant crops as a major cause of Brazil’s top position in the global ranking of pesticide use. The report pointed out that pesticides could already be placing the whole population at risk of diseases such as cancer and called for a shift to agroecological methods of food production.

In stark contrast with these progressive responses is what happened in the UK. The British public and media were subjected to the usual collection of ‘spoiler’ quotes from the Science Media Centre.

The SMC published six quotes from scientists, all but one of whom disagreed with the WHO and reassured the public that glyphosate herbicides were not a concern in real-life conditions. The one honourable exception, Prof Andreas Kortenkamp, urged that “home gardeners should exercise the utmost care” when using glyphosate. But his short quote was drowned out by five far longer ones, all telling people there was nothing to worry about.

Prof Colin Berry claimed in his quote that “the weight of evidence is against carcinogenicity”, while Prof Anthony Dayan MD said, “Detailed analysis of the nature and quality of the evidence overall does not support such a high level classification” on the carcinogenicity scale as the WHO had given to glyphosate.

But the SMC misled its readers as to the independence of the quote-givers. Although it now asks its carefully selected “experts” to declare their conflicts of interest, the declarations are not complete.

Berry and Dayan failed to mention that they are both members of the advisory forum of the Scientific Alliance, a corporate-friendly front group with a history of denying manmade climate change, opposing organic farming, and supporting GMOs and nuclear power.

Alan Boobis, who claimed in his SMC quote that the WHO report was “not a cause for undue alarm”, stated on the SMC web page that he received “no consultancies or grants from pesticide companies”. But he failed to declare his close ties with the International Life Sciences Institute (ILSI) and the fact that he is involved in “several” ILSI projects.

ILSI is funded by multinational pesticide, chemical, GM seed, and food companies, and designs risk assessment methods to fit industry’s interests. Boobis is co-chair with a Syngenta employee of RISK21, an apparently ongoing ILSI project focused on the risk posed by multiple chemical exposures. RISK21 is directly financed by the pesticide companies BASF, Bayer, Dow, DuPont, and Monsanto, as well as ExxonMobil and Coca-Cola. Boobis’s ties to ILSI are detailed in the Earth Open Source report, “Europe’s pesticide and food safety regulators: Who do they work for?”

The UK scientific establishment – of which the SMC is unfortunately part – has failed to realise that the quickest way to destroy trust in science is to mislead the public on scientific issues in the interests of shoring up for a few more years the toxic activities of polluting corporations.

Perhaps its blindness comes from the fact that unlike Argentina and Brazil, the UK has yet to suffer at first hand the problems that come from large-scale GMO cultivation with its consequent increase in the spraying of pesticides. Will the British government have to make the same mistakes as Argentina and Brazil before realising GMO agriculture is ultimately a catastrophe for all except a few large corporations?


Quotes from Argentine scientists in support of WHO classification of glyphosate as a probable carcinogen:

* Rafael Lajmanovich is professor of the Department of Ecotoxicology, National University of Litoral, researcher at CONICET and has conducted over 85 research investigations on agrochemicals. "The international scientific community has warned for years, backed up by studies, that glyphosate is carcinogenic. It is good that WHO has recognized this fact,” he said. And he gave an example of the evidence: "The National Library of Medicine in the United States (known as Medline) has more than 500 scientific papers on the toxicity of glyphosate."

* Fernando Manas is a member of the Genetics and Environmental Mutagenesis (GEMA) Group at the National University of Río Cuarto. For the past nine years he has investigated the effect of agrochemicals, publishing over fifteen scientific articles. He has confirmed the link between glyphosate and genetic damage, which leads to cancer and a higher risk of suffering spontaneous abortions and birth defects in newborns. "The recent classification by IARC-WHO is a consequence of the growing scientific evidence that has been generated by several independent investigators. This evidence, deliberately ignored until now, means that have been used millions of gallons of herbicide with carcinogenic potential according to regulations designed for a virtually harmless substance,” said the doctor of biological sciences. He charged that for two decades entire populations were "subjected" to chronic pesticide exposures "based on criteria developed by the same companies that produce and market" agrochemicals.

* Raul Horacio Lucero (molecular biologist and researcher at Northeastern University, located in Chaco) and Damian Verzeñassi (Faculty of Medical Sciences, University of Rosario) have studied the impact of agrochemicals for more than a decade. They confirmed malformations and cancer (among other effects). They agreed on the lateness of the classification of the IARC-WHO, but also noted the importance of the fact that in a scale of five, glyphosate has been classified in the second category of carcinogens. Both researchers called for "urgent" application of the precautionary principle, as required by the General Environmental Law: Given the potential for environmental damage it is necessary to take protective measures.

* Medardo Avila Vazquez, Physicians Network fumigated Peoples, explained that according to the new classification, "glyphosate is as carcinogenic as PCB (a chemical compound used in electrical transformers and now banned) and formaldehyde, both members of Group 2A".

The National Ecological Action Network (Renace), composed of 23 organizations from across the country, said it is a “common industry practice“ to affirm the safety of a product, use it, and only years later recognize the harms. They cited as examples endosulfan and DDT. "The companies argue that it is not shown to cause harm and government officials deny the evidence of independent scientists," they complained, and said a shift to a production model without pesticides was "imperative".

Pesticide Action Network Latin America (Rapal) urged the immediate implementation of existing legislation ("precautionary principle") to limit the use of glyphosate and called on the Ministries of Agriculture, Health and Environment to take urgent action to "protect health and prohibit the use of the herbicide".

Sofia Gatica, of the Mothers of Ituzaingó (Córdoba) organization, recalled that children die at a young age and suffer disabilities. "Why has WHO waited so long to recognize what glyphosate does?” she asked, and added: "You cannot play with the lives of our children. No more experiments on our people."