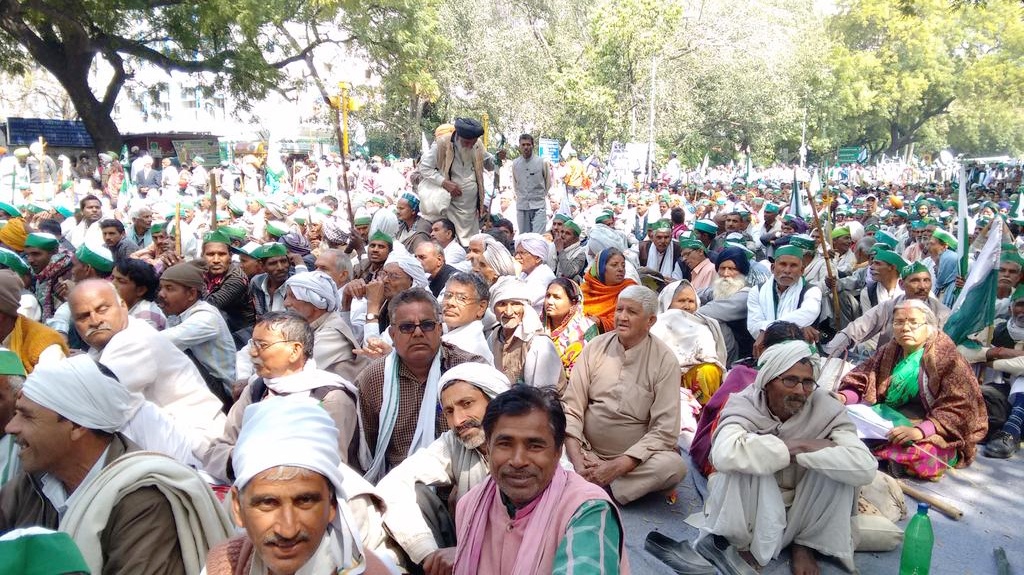 Modi government targeted for “pushing for unneeded, unwanted and unsafe GMOs in farming”

Thousands of farmers have taken to the streets in a Kisan Maha Panchayat (farmer meeting) in Delhi, India, in protest at the Modi government’s anti-farmer policies, which include uncritically promoting open field trials of GM crops.

There is some speculation in India that the National Democratic Alliance (NDA) coalition, led by Narendra Modi (now prime minister), may have come to power with the help of generous funding of their election campaign by the GMO lobby. It is said that this may explain their conversion to the pro-GMO cause.

Though there appears to be little transparency in political funding in India, we hope the Modi government will move to allay fears of corruption by publishing full details of its election campaign funding.
—

Major farmer unions of India affiliated with the All India Coordination Committee of Farmers Movement (AICCFM) have launched a massive agitation against NDA’s anti-farmer policies, and to seek a resolution to several burning issues pertaining to farm livelihoods, on March 18th 2015 through a Kisan Maha Panchayat in the heart of India’s capital.

Thousands of farmers have resolved to stay put on Parliament Street in India's capital until the government engages them in a dialogue to resolve various burning issues. Anti-farmer measures through the Land Acquisition Ordinance, recent report of Shanta Kumar High Level Committee on restructuring FCI, the mindless push by the government of GM crops, lack of fair and remunerative prices for farm produce, demand for a farm income commission, removing agriculture from free trade agreements including WTO, adequate disaster relief for farmers etc., are issues on the agenda of these farm unions. 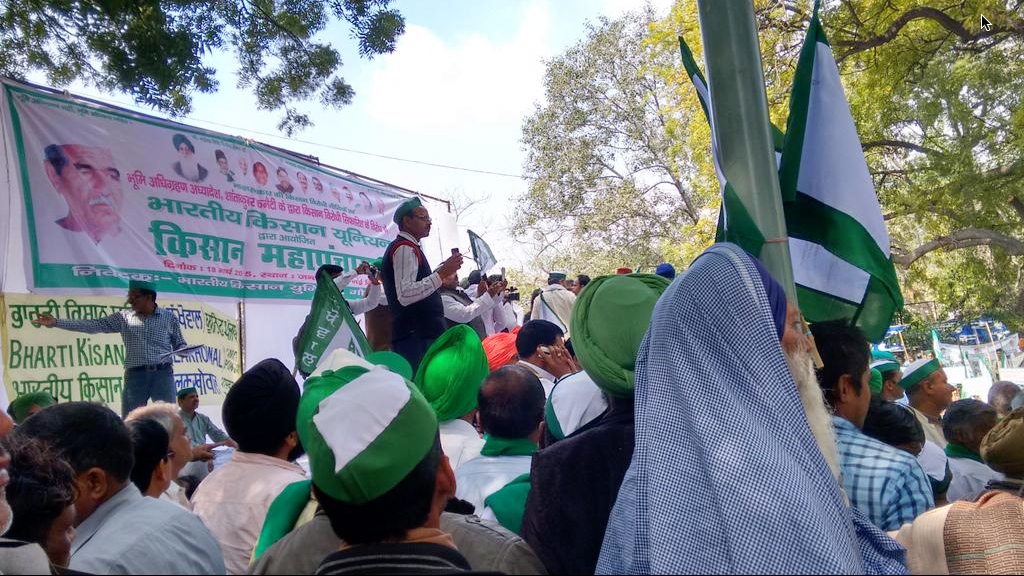 The acute farm distress in India, marked by unabated farm suicides was flagged as a matter that needs urgent addressal. It is reported that during the NDA Government since May 2014, more than 7000 farmers have committed suicide. The government, instead of increasing Budget allocation to deal with the agrarian crisis, has drastically reduced agriculture budget drastically from around 31 thousand crore in 2014-15 to around 25 thousand crores in 2015-16. In fact, the budget outlays for Dept of Agriculture and Cooperation as well as for animal husbandry and fisheries are down to the levels of budgetary allocations five years ago!

To protest against various anti-farmer policies, and to secure some long pending demands that will guarantee minimum living incomes to all farm households, thousands of farmers from all over India have congregated at the Kisan Maha Panchayat on Parliament Street in the heart of the capital today (March 18th 2015). 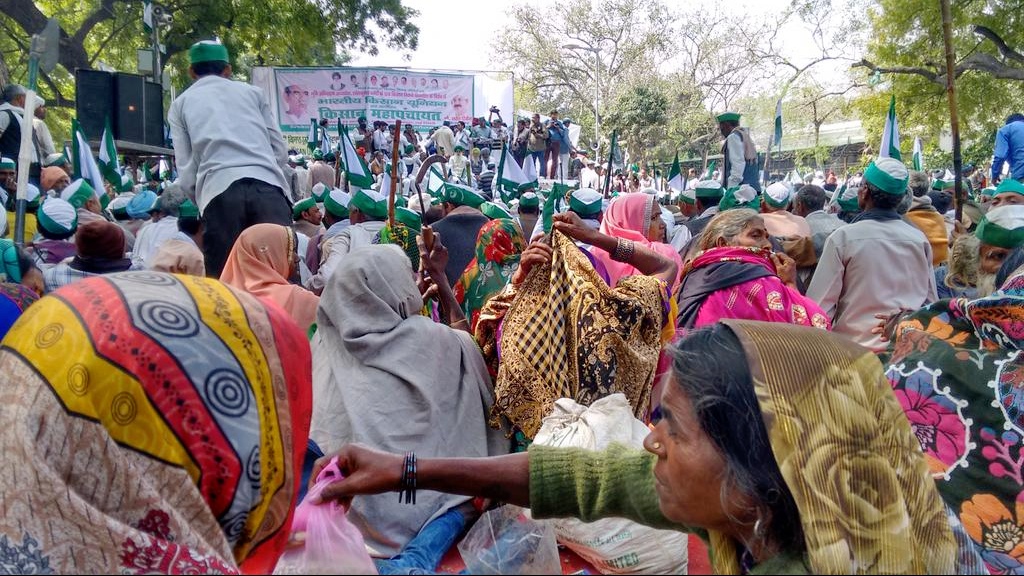 All the unions threatened to step up their agitation if the Ordinance-routed dilutions to the Land Acquisition Act of 2013 were not rolled back by the government. “In the current debate unfolding in the Parliament, we are watching out for those political parties which are ready to sacrifice farmers’ interests as well as the food security interests of the country, in their mindless support for the industry. We would like to warn them that they will have to face increased opposition from citizens who are fighting for their basic right to livelihood.

Even a preliminary prima facie analysis shows that at least 50% of the tens of lakhs of hectares that have been acquired in the name of land banks, industrial corridors, freight corridors, highways, airports and so on have remained unallotted or unutilized for the stated purpose – given that the average Indian farm household has just around one hectare of landholding, this means dispossession of lakhs of farmers straightaway, and this is totally unacceptable. In such a scenario, protecting farmers’ interests without diluting consent and comprehensive impact assessment clauses in law becomes critical”.

Shri Ajmer Singh Lakhowal, President, BKU Punjab said that various moves by the government in the past few months belie the BJP promises before elections that emphasized on increase in farmers’ income with an acknowledgement that agriculture is the largest employer in India. “Whether it is the reported plans to dismantle the current procurement system in the country in the name of a High Level Committee report for restructuring FCI or the lack of any moves to announce MSPs that give a margin of at least 50% over cost of cultivation, it is apparent that this government is not committed to reviving agriculture or securing sustainable dignified incomes to farm households. We demand that the MSP should be at least 50% over cost of production, and that procurement systems in the country be strengthened further and not weakened in any way. We need a system which will create a win-win for food security of consumers and livelihood security of farmers”, he said.

Speaking to media persons, Shri Rakesh Tikait, National Spokesperson, Bhartiya Kisan Union (BKU) demanded that the Government should set up a Farm Income Commission to guarantee minimum living incomes to all farm households. While such living incomes can be ensured through adequate, fair and remunerative price decisions coupled with procurement and other market intervention mechanisms, there is also a need to compensate for losses due to various natural calamities including wild animal attacks on crops. He also demanded that all arrears due to sugarcane farmers should be paid immediately and the same recovered later from the sugar industry.

“The government is exhibiting its pro-industry stance by pushing for unneeded, unwanted and unsafe GMOs in our farming. We want all open air field trials of GM crops stopped immediately in the country since such open air trials pose not only a risk of contamination but also risk of trade rejection. Further, any moves towards trade liberalization in agriculture whether through the WTO route or through free trade agreements are unacceptable to us. FTAs such as Regional Comprehensive Economic Partnership (RCEP) and EU India FTA will lead to slashing of agricultural tariff and allowing import of cheap subsidised foods which would further depress farmgate prices and drastically impact farmers’ livelihood.

The issues with Agreement on Agriculture are not limited to just MSP and procurement but the fact that we are getting priced out due to unfair and cleverly-camouflaged subsidies elsewhere. This is now a well-understood issue and the government has to ensure that AoA is removed from the WTO and that all FTAs being negotiated by the government should immediately drop any agriculture-related clauses”, said Shri Yudhvir Singh, Convenor of the All India Coordination Committee of Indian Farmers Movements.

It is important to note that these farmer unions are not affiliated with any political party and farmers affiliated with these unions have come from far and wide, spending their own resources, to get their voice heard with the government and to assert their rights.